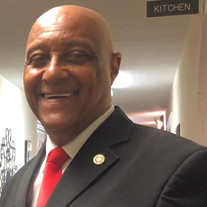 Sonny was born on December 6, 1948 to the late Luzern and Birdie Dillon in Tylertown, MS. He departed this life on March 8, 2021. His early education began in Walthall County school system where he graduated from J.J. Gulledge High School in 1967. He attended Kentucky School of Mortuary Science in Louisville, KY and graduated in 1969. He began his career as Lead Funeral Director and Mortician at Washington Funeral Home in Tylertown. Sonny was a well renowned community leader and local politician. He was the youngest elected official in the state of MS and the first African American Alderman elected in Southwest MS where two terms. He served as President of the local chapter of the National Association for the Advancement of Colored People (NAACP) for 12 years and became a lifetime member of that organization. He was a faithful member of the McComb Rotary Club since 1994, which named him as a Multiple Paul Harris Fellow. He was also a dedicated member of the Pike County Minority Business League. He was currently serving his second term as a Governor appointed officer of the Mississippi State Board of Funeral Service. Additionally, he was a member of the Mississippi State Board of Funeral Directors Association in Jackson, MS. He organized the first protest with a march in Tylertown alongside Dr. Martin Luther King Jr.’s daughter. In the mid 70s, he was instrumental in renaming Lundy Street to Martin Luther King Drive in Tylertown, and he led the first King March and Celebration from Highway 98 to Tylertown First Baptist Church. He actively participated in the Martin Luther King Jr. parade in Tylertown for more than 20 years. He was an integral part of establishing Southwest Health Agency for Rural People (SHARP) clinics and served as one of the founding board members for that organization. He was a longtime member of Walker’s Chapel Baptist Church in McComb where he served on the Board of Trustees, President of the Male Chorus, and other roles within the church. In 1971, Sonny married Georgia Dillon of Magnolia, MS. They have five children: one son, the late Lomaeine “Dickie” Dillon, four daughters, Crystal (Tony) Hollins of Allen, TX, Sebrina (Walter) Banks of Orlando, FL, Lillian Dillon of Washington, D.C., and Carmen (Javonnie) Lenoir of Tylertown, MS. They have eight grandchildren, a special niece, Tammy Hughes, a devoted great nephew, Nicholas Mallard, a host of nieces, nephews, cousins, and friends. A Public Viewing for Mr. Luzern “Sonny” Dillon will be held on Tuesday, March 16, 2021 from 9:00 AM – 1:00 PM at First Baptist Church McComb, MS and will continue at City Hall in Tylertown, MS from 3:00 PM – 5:00 PM. A memorial service will be scheduled at a later date. Due to COVID-19 restrictions, a repass will not be held. Special Note: Flowers and Memorial Contributions are equally welcome. The family wishes that memorial contributions be made to the following organizations: Boys & Girls Club Southwest of McComb & Tylertown www.bgcswms.com Southwest Mississippi Children’s Advocacy Center www.swmscac.org The Rotary Foundation www.rotary.org

Sonny was born on December 6, 1948 to the late Luzern and Birdie Dillon in Tylertown, MS. He departed this life on March 8, 2021. His early education began in Walthall County school system where he graduated from J.J. Gulledge High School... View Obituary & Service Information

The family of Mr. Luzern Stanley "Sonny" Dillon created this Life Tributes page to make it easy to share your memories.

Send flowers to the Dillon family.