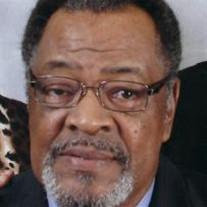 Robert, the 4th of five children born to Earnest and Marie Coney Gayden , was born January 24, 1943 in Amite County. He attended and graduated from Central High School in Liberty, Ms in 1962. While at Central, he played football and drove a school bus. He passed away peacefully on September 15, 2020 at his residence. Robert was drafted in the United States Army in September 1966 and served until 1969, where he was apart of the 82nd Airborne Division and completed a tour of duty in Germany. Robert met Lorraine Banks in January of 1964 and they were married on December 19, 1971. Robert and Lorraine shared many harmonious years of marriage, as they traveled extensively with their daughter Robin, Nate Waterman and family, and later with their grandchildren Lauren and William and sister in law Bobbie. In December 2020, they would have been married forty-nine(49) years. Robert was a member of the the Improved Benevolent and Protective Order of the Elks Independent Lodge #8946 and served as Exalted Ruler (President) for many years. He attended many district and state conferences to represent the Mccomb Lodge. Robert was a loyal, lifelong member of Tangipahoa Freewill Baptist Church where he served as a choir member, groundskeeper, and a trustee. He was faithful in attendance until his health failed. He also served as Chairman of the Trustee Board for the Mississippi Freewill Baptists, Inc. and was honored in August 2018 for his many years of dedicated service in that capacity. He and Lorraine were charter members of First Unity Credit Union in Mccomb. Always a hardworking and devoted husband and father, Robert was a commercial operator for various companies for many years. He spent the last eighteen(18) years of work driving for Walmart Corporation and retired in 2004. Robert was proceeded in death by his parents, brothers Joe Edward and Paul Hilton, a sister Earnestine Wells and several nieces. He leaves to cherish his memories his loving wife Lorraine Gayden of Summit,MS; a daughter Robin Elaine(Elder Terry) Bridges, of Mccomb; a son Anthony Dominic(Jessica) Jackson-Ishmael of Houma,LA; grandchildren Lauren Elaine Johnson of Baton Rouge,LA , William Robert Alexander of Mccomb, and Rose Orion Jackson-Ishmael of Houma; a sister Christine Smith of Mccomb; brothers-in-law Jerry Smith and Prentiss(Dessie) Banks, Jr. of Mccomb; sisters-in-law Dorothy Dean Gayden of Oakland,CA and Bobbie J. Banks of Calumet City, IL; numerous nieces and nephews; a goddaughter Natasha R. Jackson of Mccomb; special friends Nathaniel and Charlestine Waterman of Brookhaven, other relatives, and friends. "I have fought a good fight; I have finished my course, I have kept the faith." II Timothy 4:7 Visitation Services for Mr. Gayden will be Saturday September 19, 2020 from 4 pm - 7 pm at Craft Funeral Funeral Home in Mccomb, MS. Family, Friends and Reflections hour will be from 7 pm - 8 pm. Graveside services will be Sunday September 20, 2020 at 2 pm Tangipahoa FWB Church in Summit, MS. Elder Terry Bridges will officiate the services. We humbly ask that everyone please wear a mask and follow the social distancing guidelines that have been set in place to ensure the safety of yourselves and the family.

Robert, the 4th of five children born to Earnest and Marie Coney Gayden , was born January 24, 1943 in Amite County. He attended and graduated from Central High School in Liberty, Ms in 1962. While at Central, he played football and drove a... View Obituary & Service Information

The family of Mr. Robert Gayden created this Life Tributes page to make it easy to share your memories.

Robert, the 4th of five children born to Earnest and Marie Coney...

Send flowers to the Gayden family.