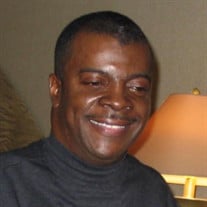 “O Death where is your sting? O Hades where is your victory? The sting of death is sin, and the strength of sin is the law. But thanks be to God, who gives us the victory through our Lord Jesus Christ. Therefore, my beloved brethren, be steadfast, immovable, always abounding in the work of the Lord, knowing that your labor is not in vain in the Lord.” Mr. Victor Renard Powell, son of Rev. Emanuel and Johnnie Jackson-Powell, was born January 7, 1962 in Chicago, IL. He received his wings to fly away and be at rest with the Lord on September 25, 2020, after 38 years in his illness. Victor moved to Mississippi in 1967 and united with the Tickfaw Baptist Church family and later with the Mt. Pilgrim Baptist Church family. He received his formal education from Central Elementary and Central High School, where he was a member of the marching band. After high school, Victor attended MS Valley State University, where he graduated with a Bachelor’s Degree in Music in 1982. He also attended and graduated from Ashford University in Iowa with a Bachelor’s Degree in Counseling. Victor attended the grand opening of the Epcot Center on October 27, 1982, where he was injured and became permanently paralyzed. In March 2013, he suffered a massive stroke. Victor was always happy and never sad. He was well taken care of by his family and his doctors at Southwest MS Regional Medical Center. Victor was the owner of Victor, Inc. Trucking Company, The Choices Project and a philanthropist, always willing to help people. Survivors of Victor include; his parents Rev. Emanuel and Johnnie Jackson-Powell, Sr., 5 Brothers; Tyrone(Iva)Powell, Lloyd(Julia)Powell,Rev. Emanuel, Jr.(Veronica)Powell, Ricky Powell, Zephaniah(Adrianna)Powell, 1 sister; Joye(Allen)Causey, 4 nieces; Lisa Victoria, Maria, Zoey and Patara, 5 nephews; Emanuel III, Willye Renard, Rickye, Simeon and Jerry, 1 great niece and 1 great nephew, 5 aunts; Christine Williams, Helen(Clarence) Burton, Cloteal Martin, Bessie(Earnest)Fleming, Essie(Roosevelt)Haynes and Many, Many cousins and friends. Visitation hours for Mr. Powell will be held Saturrday, September 26, 2020 at Craft Funeral Home in McComb, MS, from 6 pm until 8 pm. His graveside service will be held Sunday, September 27, 2020 at 12 noon at the Powell-Jackson Family Cemetery in Liberty, MS. Rev. Emanuel Powell, Jr. will officiate the funeral service. Let us please continue to abide by the social distancing guidelines that have been set in place. Please share online condolences at www.craftfuneralhome.org. “I have fought the good fight, I have finished my course, I have kept the faith: Henceforth there is laid up for me a crown of righteousness, which the Lord, the righteous judge, shall give me at that day: and not to me only, but unto all them that love his appearing.” “We Will Meet Again”

&#8220;O Death where is your sting? O Hades where is your victory? The sting of death is sin, and the strength of sin is the law. But thanks be to God, who gives us the victory through our Lord Jesus Christ. Therefore, my beloved brethren,... View Obituary & Service Information

The family of Mr. Victor R. Powell created this Life Tributes page to make it easy to share your memories.

Send flowers to the Powell family.